All I saw at this stage was a beautiful illustration of Sarah – the end result. But behind the scenes, there was much more to bringing Sarah to life. At this point, it was all up to Chantal. From her perspective, she said she was looking forward to working on Slow Down Sarah! “I liked the energy, fun and actions. It suits my style. I like movement.”

I was thrilled to be working with Chantal! Just look at her bio:

Chantal Stewart was born in Paris, studied at the School of Applied Arts and began her career as a graphic designer. After moving to Australia, she discovered her true calling of becoming a children’s book illustrator. Chantal has worked with some of Australia’s most renowned publishers and authors. Her books have been shortlisted in the Children’s Book Council of Australia Book of the Year awards multiple times, as well as the Young Australians Best Book Awards. Chantal was also shortlisted for the Children’s Book Council of Australia’s Crichton Award. Her titles include, I Spy Mum!, I Spy Dad!, Percy, Smelly Chantelly, A Ghost of a Chance, Max Meets a Monster, and To the Light. She lives on the outskirts of Melbourne surrounded by trees and birds, and believes she has the best job in the world!

Bringing Sarah to life was a process… even for a seasoned illustrator like Chantal. As she described it to me, “When I started, I was a bit fuzzy. When I saw the picture of your daughter, it helped, but my biggest challenge was working out how to create Sarah, as she would be wearing a helmet for most of the book. With a helmet on, you don’t see much of a face. But I eventually worked out how to overcame that challenge. Once I get a pencil between my fingers, that’s where ideas start to take expression. It doesn’t come straight away, but once you’ve got it, you’ve got it.”

These are some of the early sketches Chantal created, as she brought Sarah to life and began the illustrations for the book. 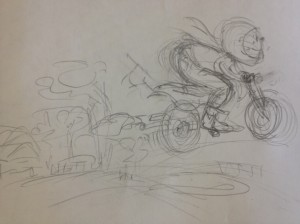 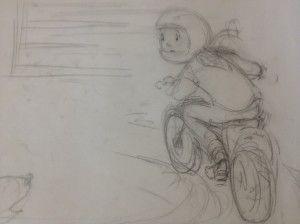 It was the start of a wonderful journey, working with Chantal and watching her create something beautiful from nothing. What incredible skill and imagination! 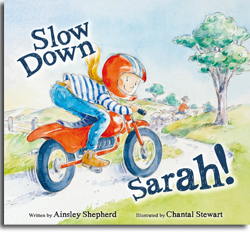 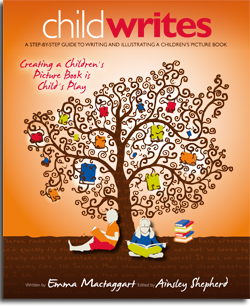